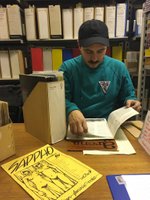 Paul Sammut is an artist working in London, recently graduated from the Sequential Design MA at University of Brighton (2017-2019), where he was researching suburban LGBTQ+ histories. As part of his practice Sammut has worked with curator Alexandra Terry under the name P.A.S.T. Projects (2010–2015) and run the project space White Cubicle (2012–2017). He is currently a member of the queer publishing focussed collective Strange Perfume and has recently begun publishing under the imprint Valletta House. Commercial clients include Making Gay History Podcast, Martin McGrath Studio, Psykick Dancehall, Upset the Rhythm and Vice Magazine.

An accredited Relational Dynamics Coach with a focus on working with artists, Sammut regularly holds coaching sessions and artist’s surgeries to aid in project development and realisation; most recently these have been for MA Narrative Environments, CSM, London; Fruitmarket Gallery, Edinburgh; and the London Creative Network programme at SPACE, London. He has worked for the Arts Council England NPO Book Works since 2009, is a trustee for the arts charity Three Letter Words, and is currently working on curating some projects for the New York-based non-profit Visual AIDS on the representation of HIV and AIDS in comics; to open Summer 2021.

Bedrooms and Hallways, published in The Coelacanth Journal #9, London

One Dot Says To Another, George Polke, London

Press Release text for There is Nothing Left to Lose, an exhibition of work by James E. Smith, Stand Assembly, Nottingham